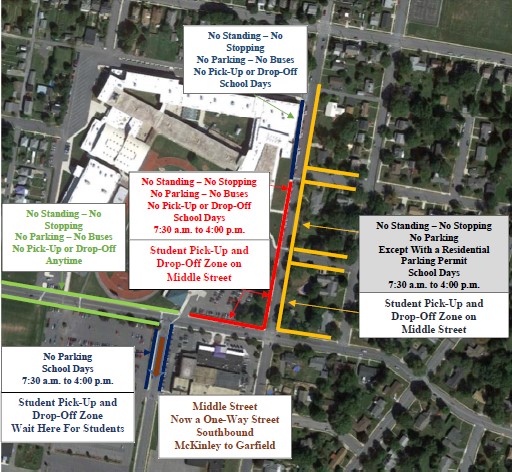 Note: this press release and image were provided by the Borough of Chambersburg.

The Borough’s Parking, Traffic and Street Lights Committee, under the leadership of Council Member Kathy Leedy, worked on various concepts beginning in the spring of 2018. “The hope,” according to Committee Member Michael Herbert, “was to install any changes over the summer before the first day of school.”

The plan, endorsed by High School Principal Bradley Ocker and Director of School Security Gary Carter, was to relocate much of the activity formerly on South Sixth Street alongside the High School, to Middle Street, closer to the YMCA.

According to Assistant to the Borough Manager Phil Wolgemuth, “the basic point we want to communicate to students and parents is ‘Please use Middle Street between McKinley Street and Garfield Street for student drop-off and pick-up between 7:30 a.m. and 4:00 p.m.’”

Jeffrey Stonehill, Borough Manager, and staff to the Parking, Traffic, and Street Lights Committee added that South Sixth Street, between McKinley Street and Tolbert Avenue, as well as, McKinley Street, between South Sixth Street and Stanley Court, are just too busy with traffic at the beginning and end of the school day. “It is dangerous,” he added. “The Chambersburg Police Department came to the Committee with dash cam video showing the chaos at the beginning and end of the school day. Despite Middle Street being on the other side of McKinley, Middle Street is a much safer place for parents to drop-off, pick-up, and sit and wait, for students who are driven to or picked up at the High School.”

The new traffic pattern includes changing Middle Street, the small street between the Chambersburg Memorial YMCA and the High School Parking Lot into a one-way street southbound for one-half block from McKinley Street to Garfield Street. Stonehill added that “CASD Officials requested that if Middle Street were to become the pick-up and drop-off zone, then the street should be one-way.”

Council President Heath Talhelm added “As a parent of a high school student, I am glad that the Borough is taking action to try to fix this situation. We pledge to keep watching the area as the new school year begins. Parents will need to learn where to go and we will work with school officials to help inform them. The Chambersburg Police Department will work with the school to move buses, parents, students, and others to the correct location. We just want safety for our kids.”

Carla Christian, Executive Director of the Chambersburg Memorial YMCA, asked if Council could monitor the changes and make additional changes if the new pattern has problems. Stonehill replied that “Yes, Council can make additional amendments or changes to the traffic pattern if they feel the adopted plan needs to be changed.”

The Borough of Chambersburg Highway Department anticipates that the new street signs will be installed before the first day of school.

If you have any questions, please contact Phil Wolgemuth, Assistant to the Borough Manager, at 717-251-2436 or pwolgemuth@chambersburgpa.gov.