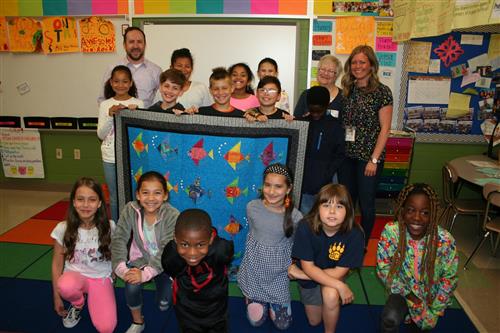 *The following is a joint press release from the Chambersburg Area School District and the ReliAvail I.T. Company.

CHAMBERSBURG, Pa. – June 6, 2019: ReliAvail I.T. Company and The Foundry artists’ cooperative today announced the unveiling of a joint fundraising contest that aims to raise funds and awareness for two area charities, along with their youngest benefactors. The fundraiser, named Benefit Chambersburg, will feature a quilt handmade by students of Benjamin Chambers Elementary School teacher Ms. Erika Besecker. The quilt will be unveiled and prominently featured at The Foundry’s 100 S. Main St, Chambersburg location during the months of June and July. The contest will culminate in a presentation during North Square Farmers Market Kid Vendor Day and will see each charity receiving their share of proceeds, with the winning charity also receiving the quilt.

This year’s quilt was originally auctioned in April 2019, to benefit a school family affected by a house fire. ReliAvail I.T. Company Founder and CEO Dennis Little purchased the quilt in the April auction and then announced his plans to donate the quilt to fundraising efforts for two area charities. Mr. Little aims to raise funds and awareness of the community, charitable, and art movements that bring generations together and make a difference for children and families in the greater Chambersburg area. “What started as a small way to give back has blossomed into a way to show our community’s youngest artists and crafters that they can make a difference both here at home, and very far away,” Little commented. “I am hopeful that a new generation of young people will see the ripple effect of being kind and carry that message forward, bringing their families and friends into the fold along the way. This is an exciting project for our entire community.”

Ms. Erika Besecker’s grandmother, Mrs. Martha Besecker, has worked with Ben Chambers students over the past several years to craft a total of four quilts, the majority of which were donated to charitable causes. “The quilt design and construction efforts reinforce what the students learn during lessons in math, art, cooperation and community awareness. We really love showing the kids how everything comes full circle,” according to Ms. Besecker.

While it is featured in the front window of The Foundry’s downtown Chambersburg showroom, the quilt will be accompanied with information about the campaign’s nominated charities, and give viewers a way to vote for their favorite by way of donation. All proceeds will benefit Sweet Grace Ministries and Caitlin’s Smiles, with the charity that raises the most funds also receiving the quilt.

Harrisburg-based Caitlin’s Smiles was founded in 2004 by Cheryl Hornung in memory of her seven-year-old daughter Caitlin, who lost her battle with a brain tumor. The organization assembles donated goods into art kit care packs for children who are facing life threatening or chronic illness; those kits are then distributed through a network of health providers and caregivers. “We are so excited to be nominated as a part of this fundraiser, and proceeds will go directly to our mission of putting smiles on the faces of sick children,” Hornung remarked.

Katy Dortenzo, President and Founder of Chambersburg-based Sweet Grace Ministries is equally enthused; the charity offers comfort baskets, bags, photography, support groups, and gowns as well as support and education through a network of eleven partnered hospitals in Pennsylvania and abroad. These services provide support and hope to families enduring all stages of infant loss. “Sweet Grace has put a special emphasis on involving children and teens in our volunteering, as well as teaching them about grief this year – to be nominated for this fundraiser fits entirely with this mission,” said Dortenzo.

Opened in 2015, The Foundry is Chambersburg's Artist Cooperative, featuring a retail shop, art exhibits, classes and Salvage Supply Store- stocked full of new & gently used art supplies. “The Foundry welcomes the work of the young artists of Ben Chambers Elementary!” said Retail Committee member Anne Finucane. "We are proud to display their quilt in our gallery; it perfectly reflects our goal to engage our community in both seeing art and making art!" 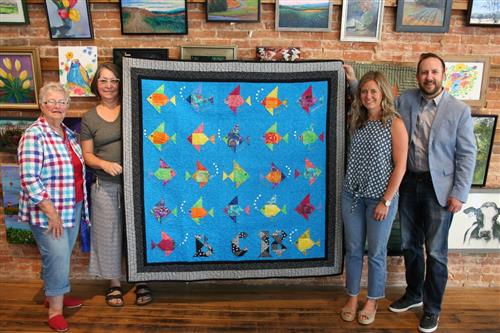